PR budgets are under ever greater scrutiny and it doesn’t matter if the budget is £2,000 or £20,000 per month, the return on investment must be justified.

This isn’t a blog about AVE and it not being a reliable measure (it isn’t though). And it isn’t a blog about choosing objectives and metrics that can be used to measure them. Instead it’s a quick post that examines how to present the information so it’s quick to understand, even when you’re not presenting it.

The type of graph you use, and the information you give will be key to helping his understanding that things are going in the right direction. As Obama said in an interview during his final month as president: “I always tell my staff, ‘Better is good.’ I’ll take better every time, because better is hard.” And while he was talking about civil rights, healthcare and education, his pragmatic approach about focusing on moving in the right direction is equally true about marketing.

Unless you’re comparing just two or three items, they are hard to give an accurate measure, certainly in the seconds a CEO will have. Added to that they are hard to make attractive, and require keys or overt labels to be added.

As per above examples – which use the same data – even when series are presented in alphabetical order (rather than by descending value) and without labels it’s easy to read the bar chart and see that the UK is slightly higher than Norway and Germany and that Sweden is highest – I can’t say the same for the pie.

The single colour also makes it easier to follow.

And while we’re at it, the same can be said for charts that use either circle size or colour to distinguish between – see geochart below – again, using the same data:

2. Colour should be used sparingly and intelligently.

Colour in a chart is incredibly important in conveying data.Too often it’s used to match a company, or each line in a chart given its own colour.

Using it sparingly allows you to draw out the one story you want to tell and psuh all other relevant, but confusing, information to the back. Take the following for some of the UK’s biggest football clubs – for this I want to know how Man United survived the loss of Alex Ferguson, to do this I’ll want to compare searches for the club over time and compare that with the big 5 (so adding Liverpool, Man City, Chelsea and Arsenal):

By separating each one by shirt colours, it’s impossible to see information in this other than more people search for clubs with red shirts. But if we’re looking at (from a marketing, not a results) basis Man United survived the loss of Alex Ferguson then we can start to see it’s not overly affected and only Liverpool (in dots to differentiate) is getting more searches.

Taking this a step further, it’s still quite hard to see information in the line graph. We want to see how this changes season by season. And by averaging this search data per season we can see if searches were increasing and how this relates to the rest of the Premier League’s big 5.

Again – colour is used to bring out not only how many searches are happening, but also, using a subtle change to show when Ferguson was / wasn’t at the club.

Taking this one stage further, this also works with a normalised figure, with searches as a percentage relative to the “Rest of Premier League” metric:

Note in the above examples I have used corporate colours – but sparingly. I’ve also used it in the same way. The other big trap you can fall into by using corporate colours is to use them throughout even if you’re demonstrating something different in different graphs, eg in graph using red for web traffic and black for search data then in graph 2 showing red for search data as this is the only metric shown.

Colour should be used to help guide a reader (especially in infographics).

And colour also has connotations that should be considered. For example, graphs about US populations should try to avoid using red and blue as this subconsciously suggests the graph is about voter choice.

3. Scales don’t have to start at zero – but don’t abuse data

One of the biggest reader complaints publications receive about charts is the y-axis not starting at zero. Indeed, Quartz receives so many they’ve done an article on exactly this stating: “Their point is that truncating the y-axis, as we often do in line charts, exaggerates what the data really say. Some people consider it a maxim that the y-axis should always be zeroed. They think to do otherwise amounts to lying. But these complaints are wrong.”

Charts are created to convey information and make a point and by always starting the y-axis at zero will obscure and confuse just as much.

Take the above example of the normalised chart. There would be nothing wrong with using the line of the rest of the big 5 as the base line:

Share price (which for publicly listed companies should be a key metric for PR agencies to measure) or exchange rates is another good example, where subtle changes results in huge consequences.

Here is Quartz’s presentation of the 2008 financial crisis and the effect it had on the economy, both using Zero as the base line and not doing so: which conveys the problem : 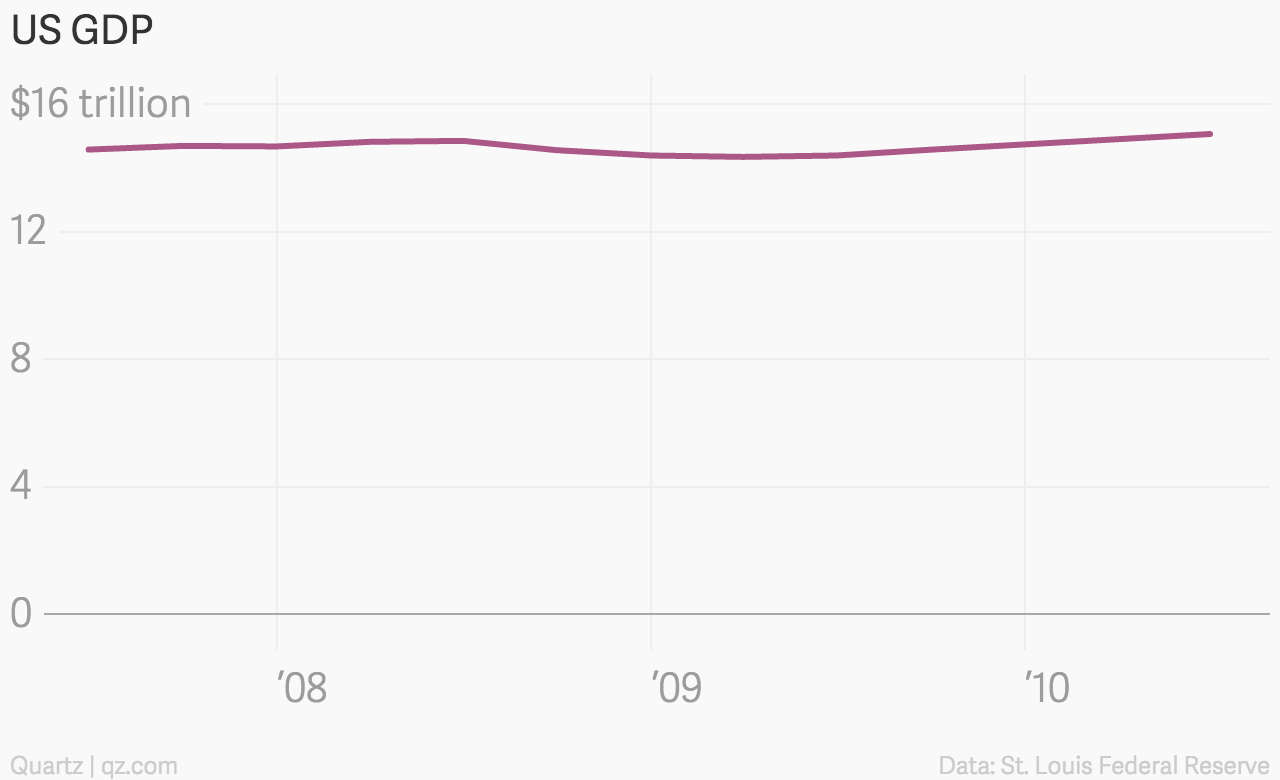 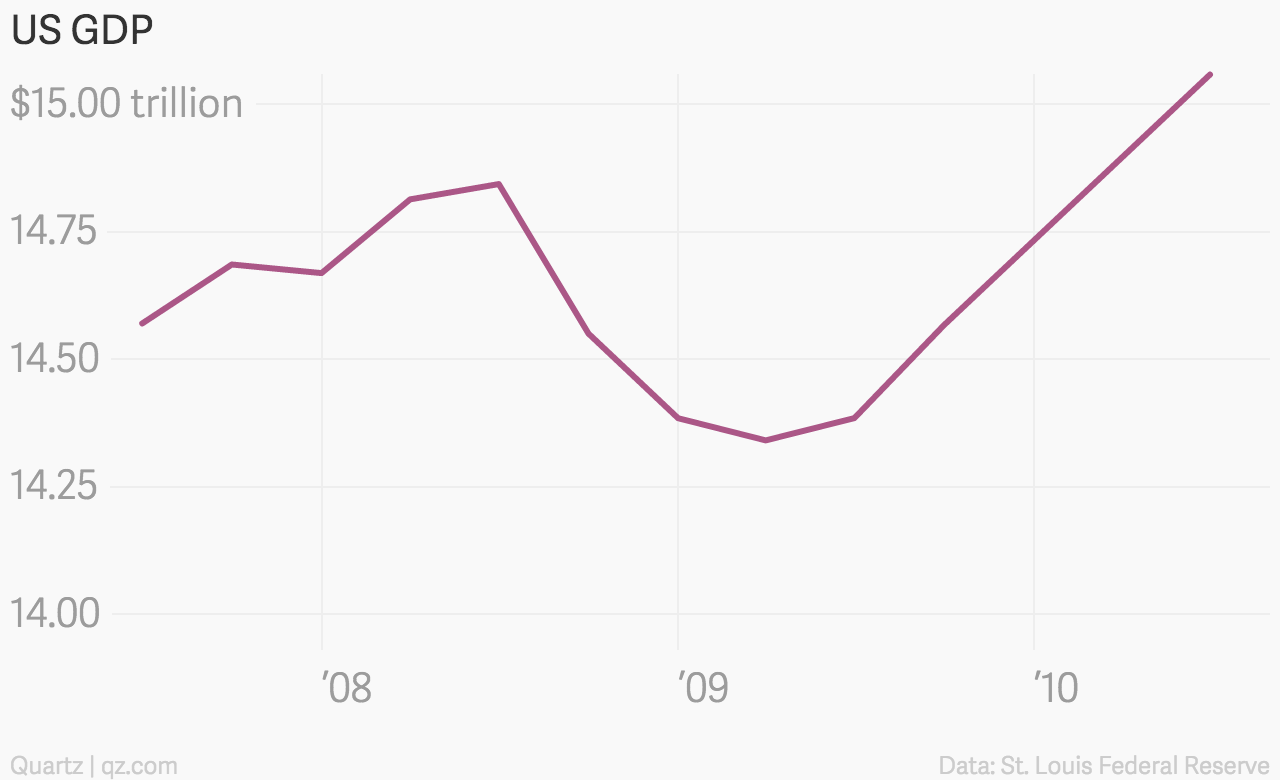 But adjusting the baseline should be done with consideration, and not to mislead. This can be seen well in my favourite Fox News graphic on tax changes, dating from 2012 and highlighting the hike in tax – recreated below: Here it’s been used to guide the reader with as large a gap as possible shown to infer a huge tax hike is coming.

In short, scales should be considered well to both show the story you want to tell, but to not manipulate the data.

4. Right axis should be avoided if at all possible

For the above graph, note also the use of the right axis and the position of the labels, which also guide the viewer to see only the large gap, without considering the scale or the actual figures. Here we edit the graph using the same data.

That’s not to say a right axis isn’t useful to show two or more unrelated metrics, but as a default people read the left axis and infer everything from this.

5. Design is about more than the way something looks

In fact, the design should consider the aesthetic appeal last of all.

Apple may be a trillion dollar company because of design, but Jonny Ive considered the way people used a device first and then made it beautiful.

Graphs should convey the information you want, tell the story that shows off your work. Highlights brought out. And then, and only then, should you hand it over to an artist to make it look good too.

You can find out more about which cookies we are using or switch them off in settings.

This website uses cookies so that we can provide you with the best user experience possible. Cookie information is stored in your browser and performs functions such as recognising you when you return to our website and helping our team to understand which sections of the website you find most interesting and useful.

Strictly Necessary Cookie should be enabled at all times so that we can save your preferences for cookie settings.

If you disable this cookie, we will not be able to save your preferences. This means that every time you visit this website you will need to enable or disable cookies again.